Committed to Excellence, Equality and Enjoyment

This year four of our children were chosen to attend a trip organised by BAFTA kids, STUDIOCANAL, Belmond and Place2Be to celebrate the release of the film Paddington 2.

As part of the trip, Her Royal Highness The Duchess of Cambridge – the Royal Patron of Place2Be- met and spoke with the children. A number of actors from Paddington 2 and its producer David Heyman were also in attendance.

The trip also featured the actual steam train seen in the film – the Belmond and the children were treated to a fun packed journey in this steam train around the Chilterns.

Please click here to view Place2Be news on the trip. 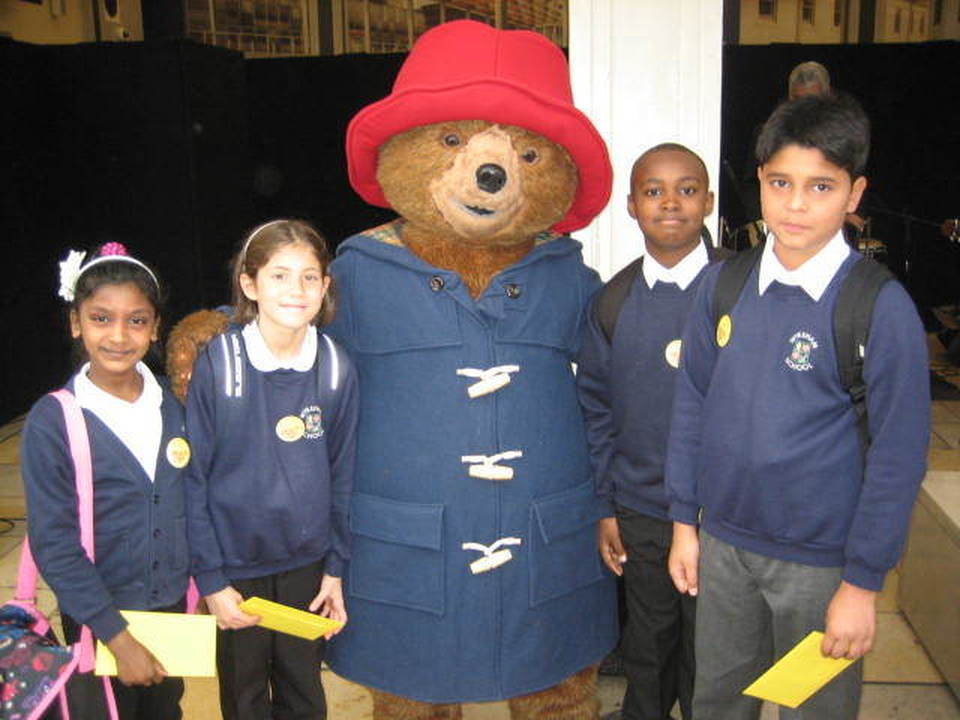 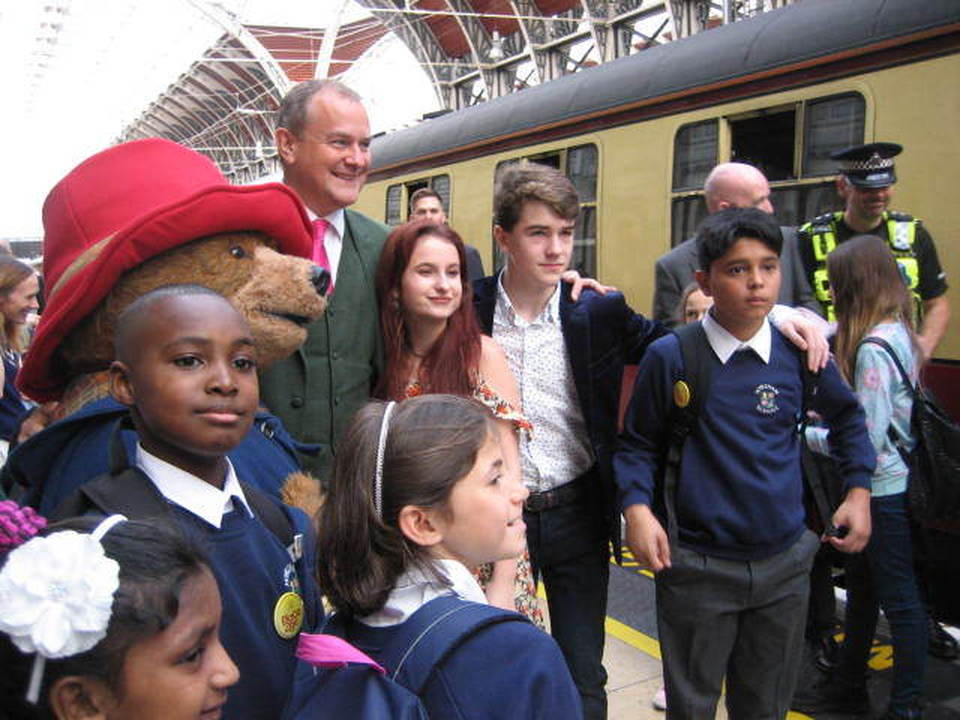 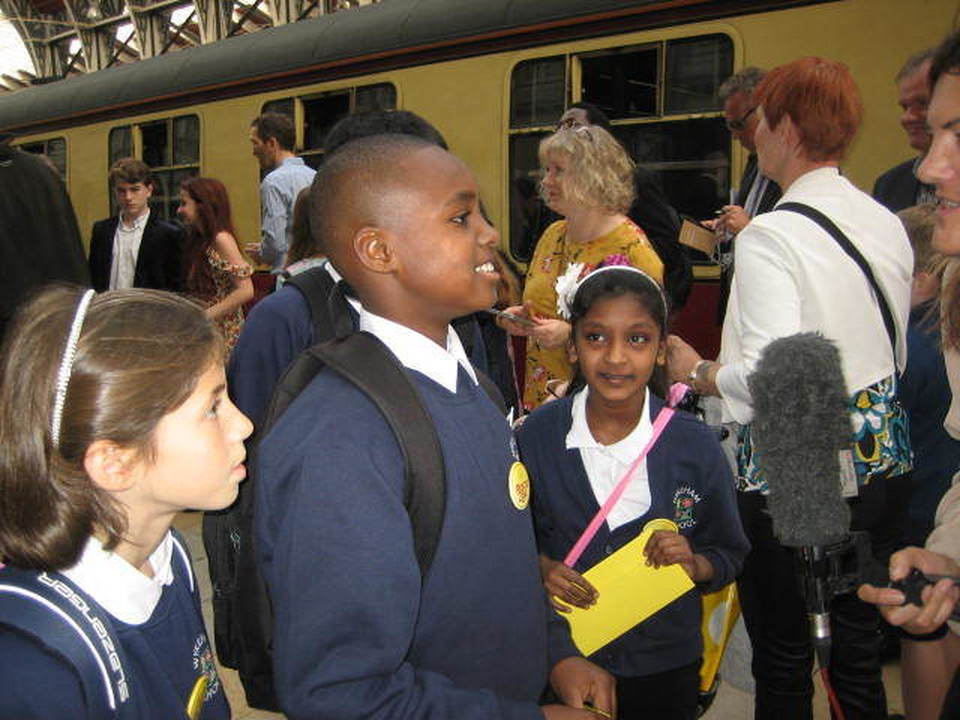 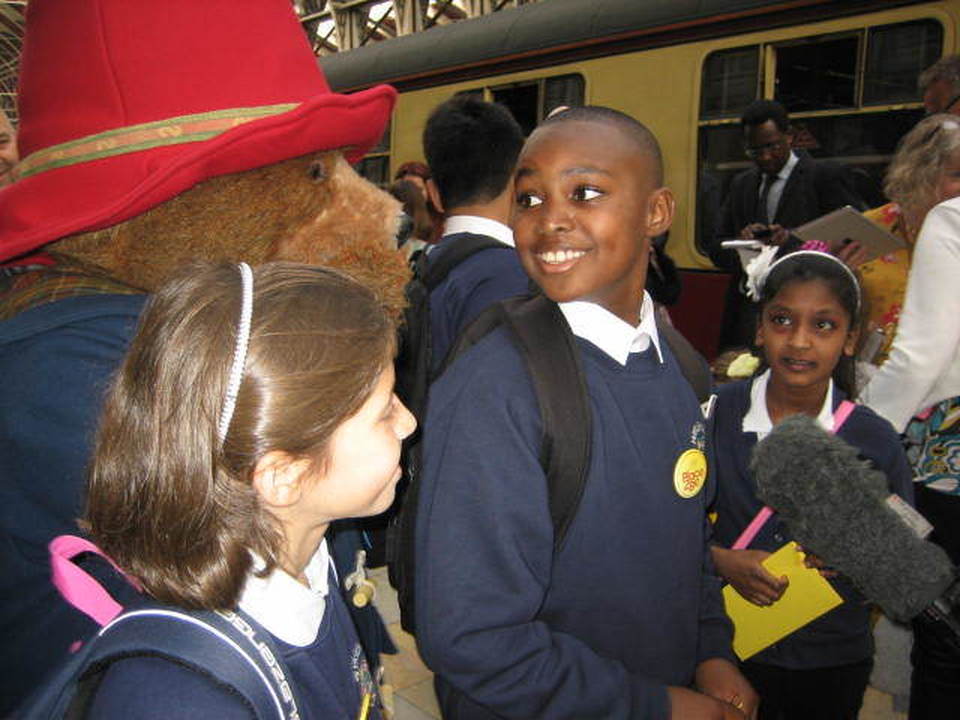 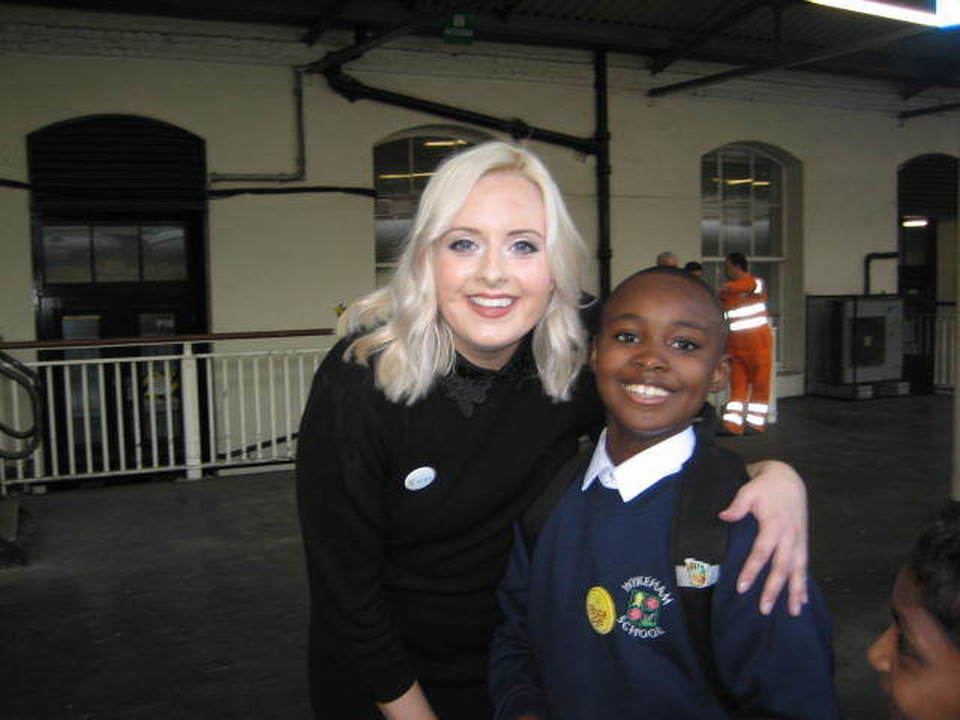 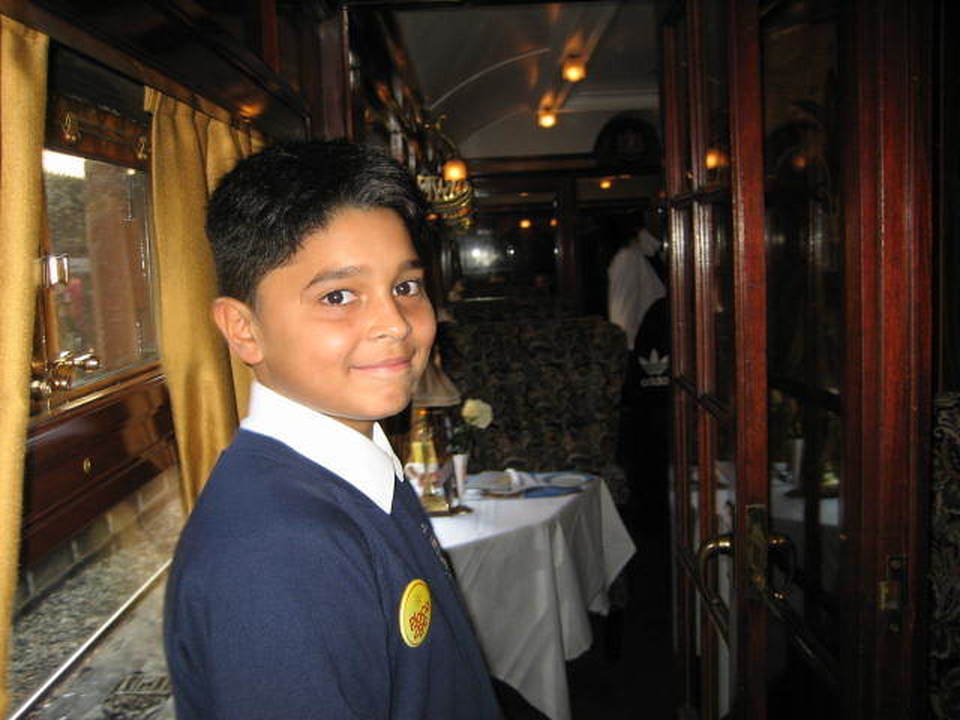 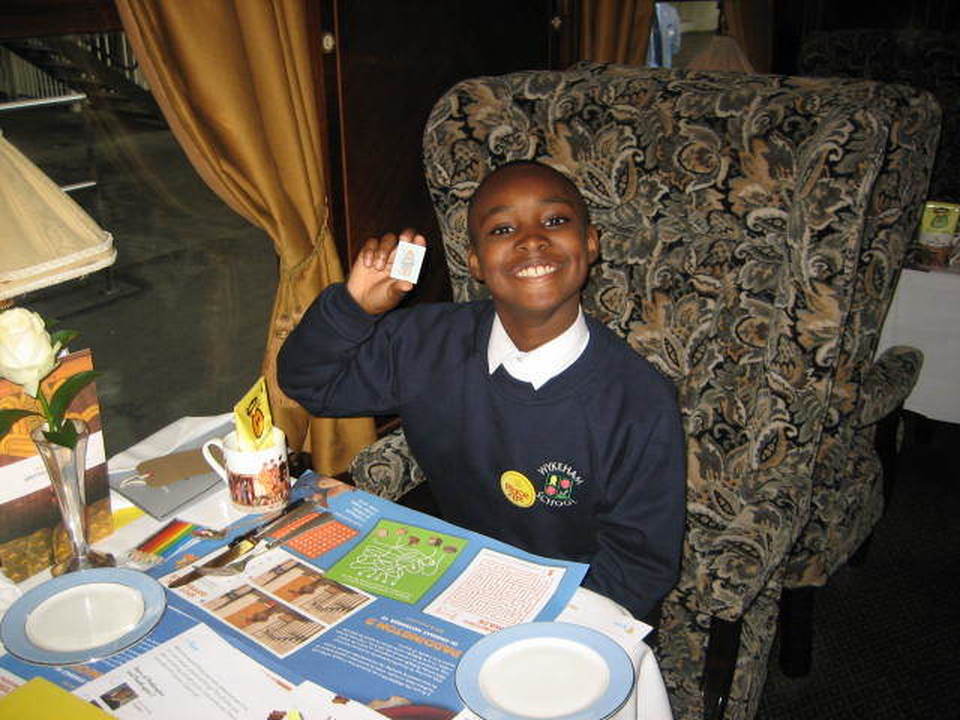 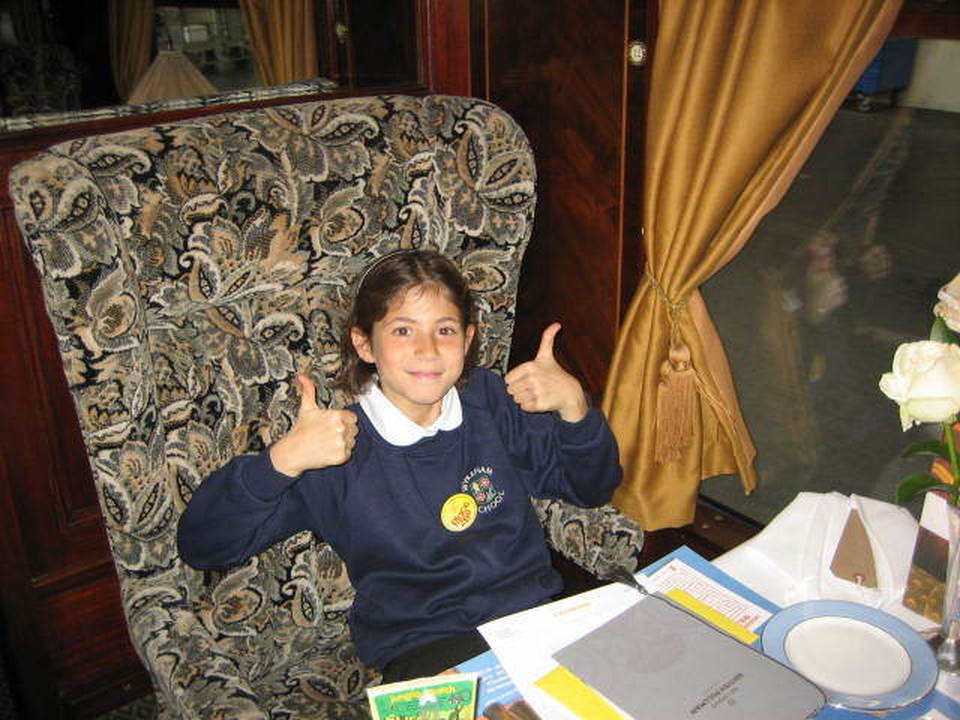 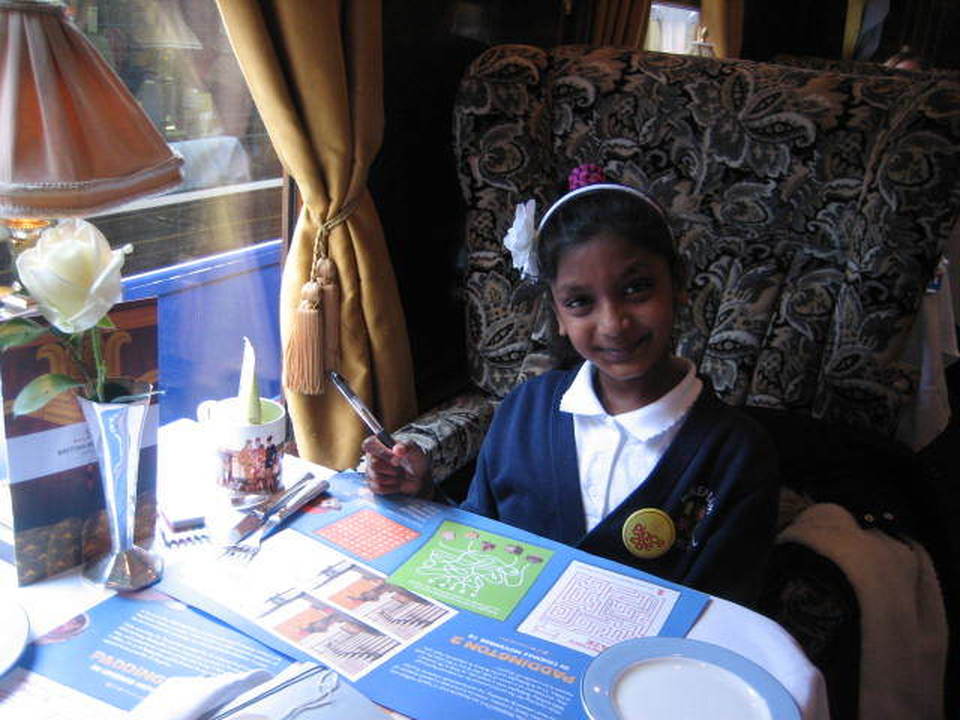 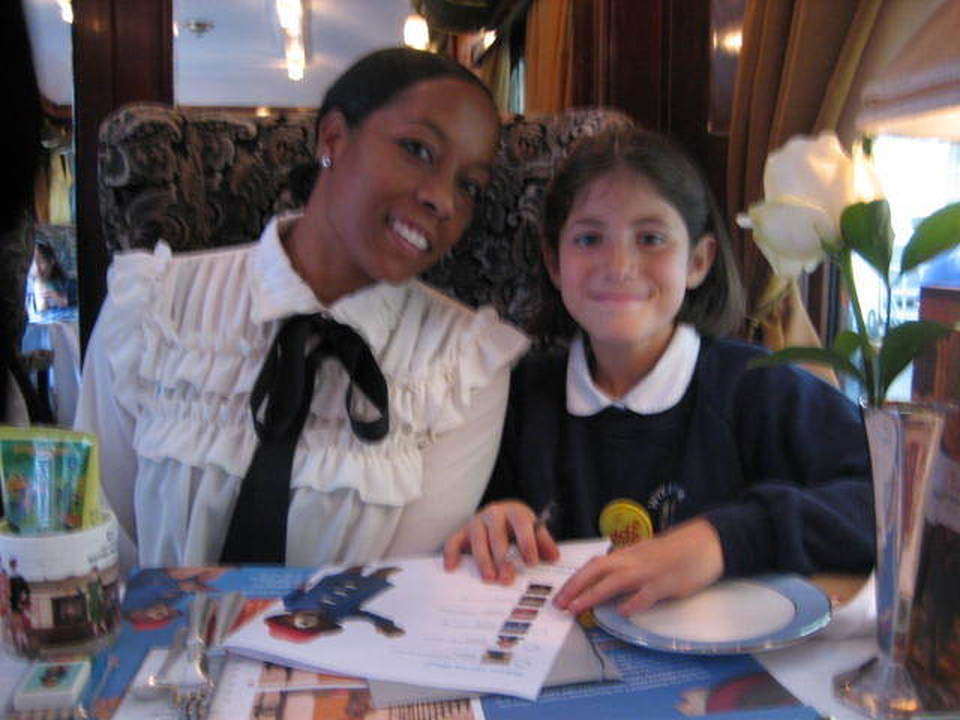 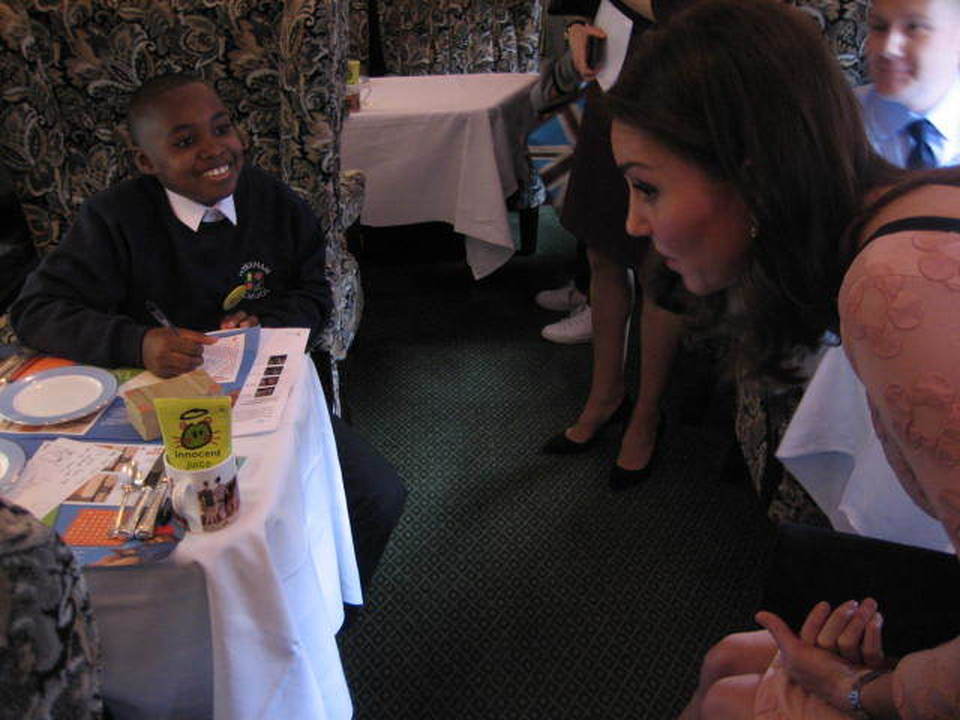 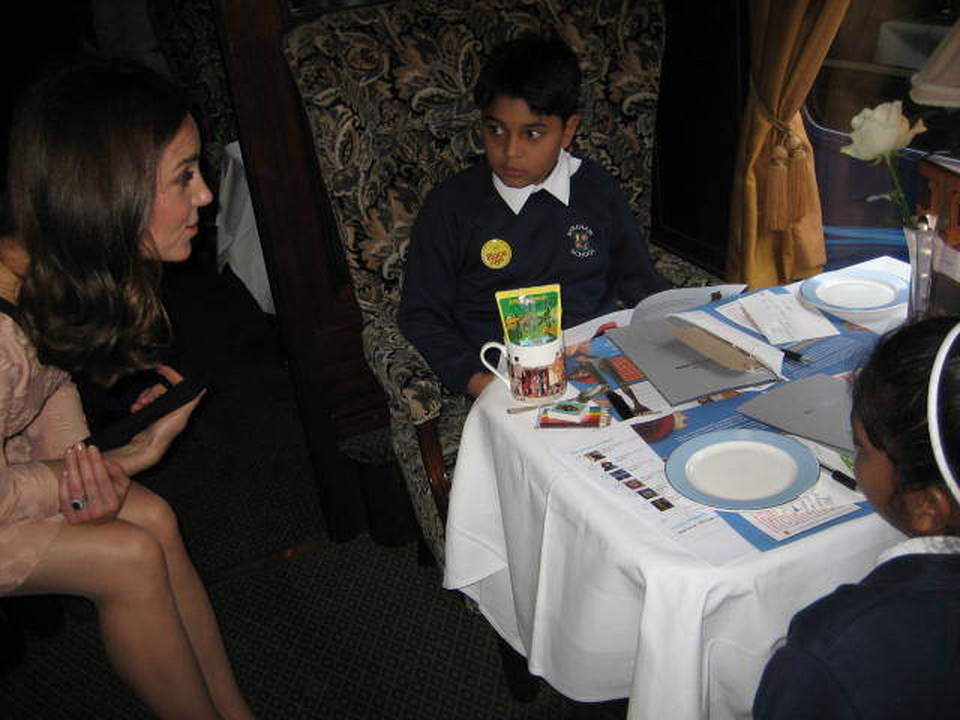 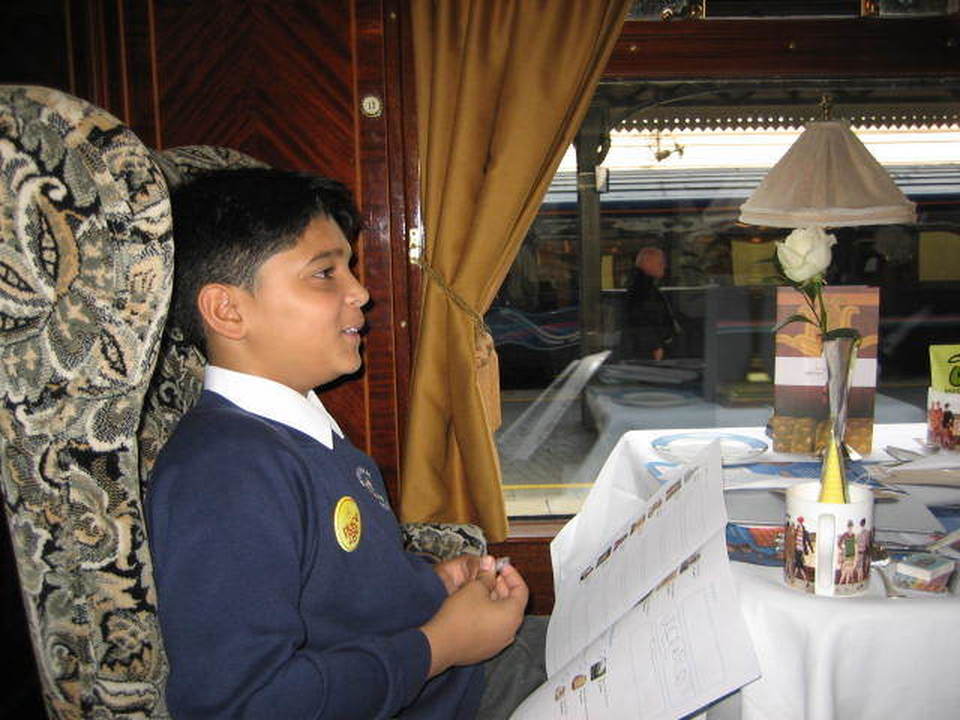 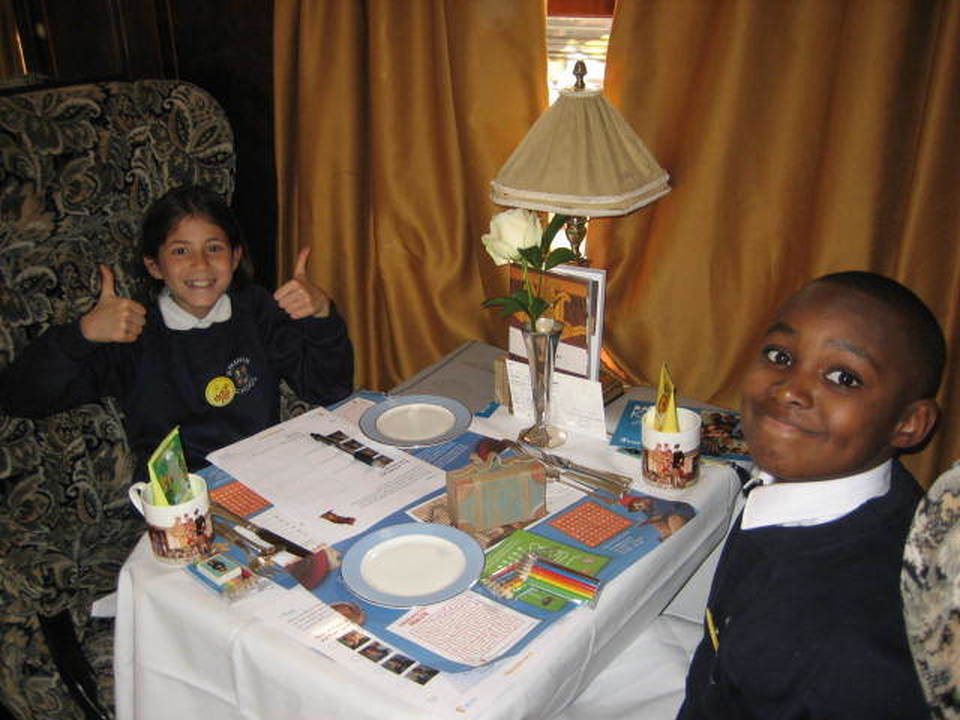 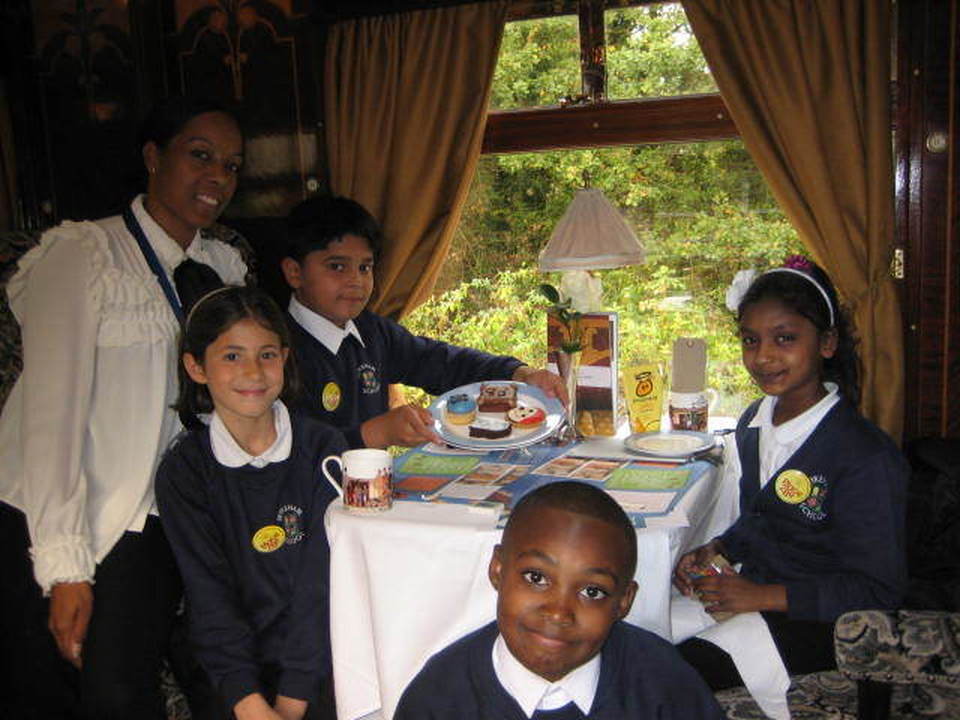 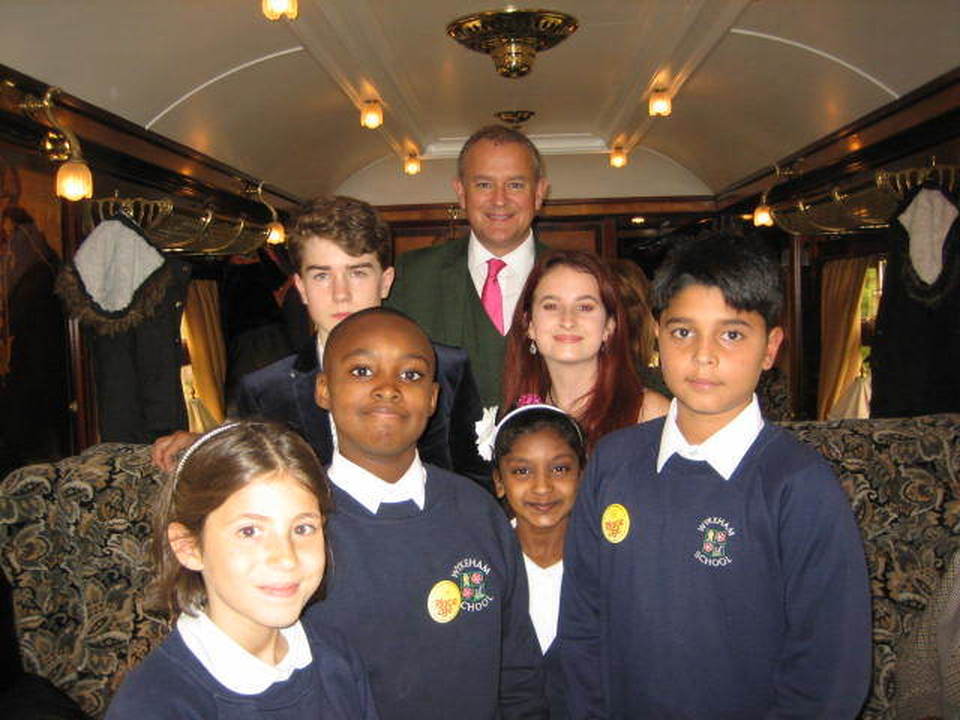 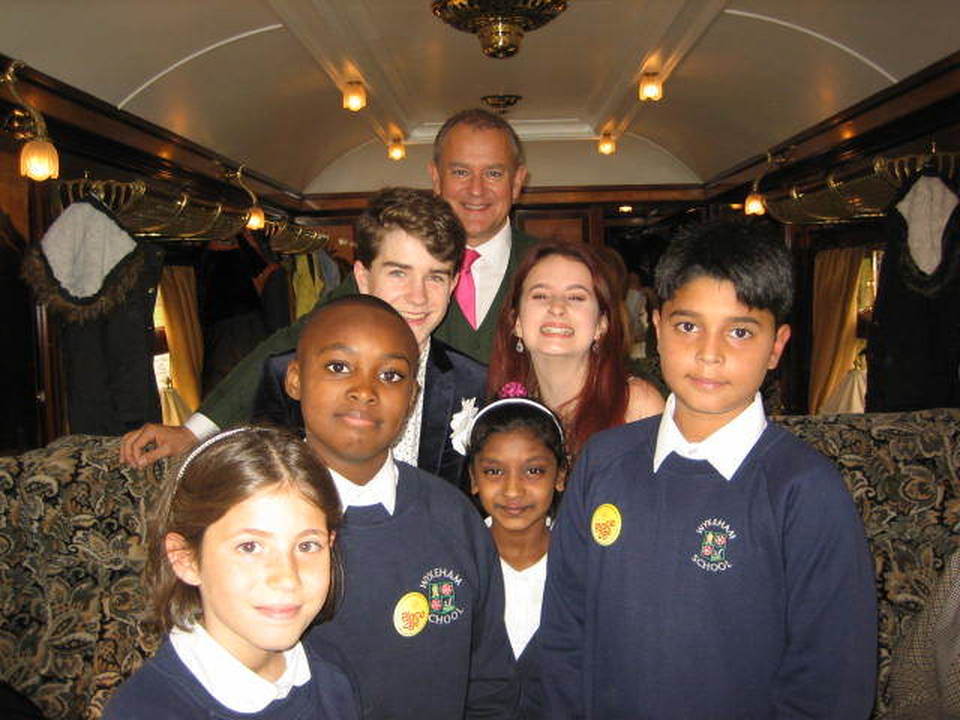 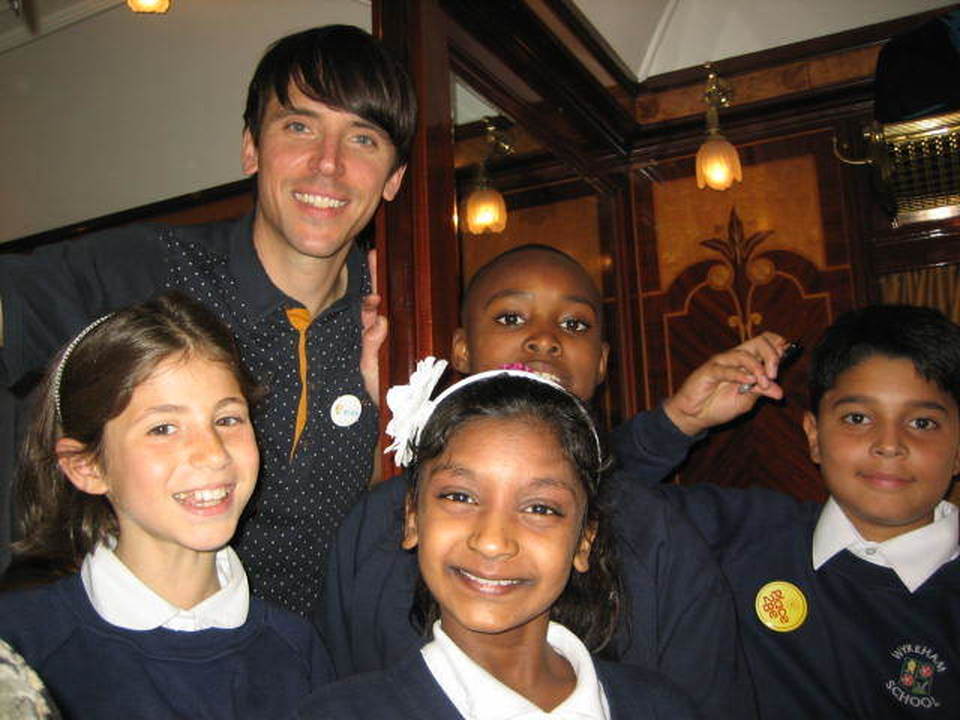 My Trip to Paddington

On Monday 16th October 2017, I travelled to Paddington with three other children and two teachers.  We started our journey at school and set off to Paddington Station.  When we got there we saw Paddington wearing a red hat and a blue jacket.  Now that I think about it - mad - isn’t it, Paddington in Paddington.  After meeting Paddington Bear we stepped on a train, but not just any train, a steam train.  The steam train is called the Belmond British Pullman.  It looked so amazing that words cannot describe.  The colour of the steam train was a creamy yellow and a white roof finished with black sections.

When we went in the train we met the Paddington and BAFTAs (British Awards for Television Academy) actors.  We also met the film’s producer.  Last of all we met the Duchess of Cambridge.  I was really gobsmacked.  She was like a normal person but with a lot of kindness – I mean the way she talks.  We had a fantastic ride on the train and they even served you food which was delicious.  When I first looked at the food my mouth watered literally.  As a memento they gave you gift bags, how kind.

What a fun-filled spectacular day.  I could not believe what just happened to me!  We gleefully walked home with smiles on our faces.  Seriously my cheeks were sore after because I was smiling so much.

On Monday 16th October 2017, I had the trip of a lifetime! It was a truly unforgettable experience. When we arrived at Paddington station, we met the head of Place 2 Be. She was kind and friendly. She told us who we were going to meet and what we would be doing: we were going on a stream train!  As we approached the platform, we saw Paddington Bear who was dancing and taking pictures with the passengers. My friends, teacher and I were lucky enough take a picture with him too. Once that was over, we patiently waited for the train to arrive while listening to musicians playing the steel pans – just like the men in the movie.  Shortly after, we made our way to our carriage and were greeted by Ben Shire and Katie Thistleton (television presenters). As we stepped on the train, we were welcomed by the steward. He showed us to our seats. The steam train which was built in the 1930s, was vintage, however it looked clean and new. The interior was very posh. There were sliding doors, velvet seats and mosaic tiles in the lavatory. I felt extremely happy and at the same time grateful to be having such an experience.

Before the train set off on its journey, there were some very special visitors. They were the Duchess of Cambridge and Princes William and Harry. Although we did not get to meet the princes, we saw them walk past our carriage. We were fortunate enough to meet the Duchess of Cambridge and she was well-dressed, polite and caring. During our conversation, I felt as though she was interested in my answers and thoughts.

During the train journey, we got to see other celebrities, such as, the actors and the producer from the movie Paddington 2, Simon Farnaby, Hugh Bonneville, Madeleine Harris, Samuel Joslin and David Heymen. In addition, we met many television presenters, such as, Nigel Clarke, Ed Petrie, Lindsey Russell and Naomi Wilkinson. As well as meeting these amazing people, we were served delicious treats which was nicely designed with vibrant colours, patterns and writing. We were also given sandwiches fit for Paddington bear – you’ve guessed it – marmalade!

Once we returned to the station, the fun wasn’t over. We got to meet the rest of the superstars and celebrities. We got the autographs and were able to take photos with them. As we left, we were given gifts to help us to remember the wonderful experience.

Written by one of Wykeham’s pupils on the trip.

We took a southbound train to Baker Street then we took an east bound trip to Paddington Station.  We got off the train and scanned our oysters.  We went up the stairs and immediately saw a Place2Be sign and met a lady called Susan.  We had two other schools coming with us.  We all had boarding passes the size of the Golden tickets in Charlie and Chocolate Factory.  We found out that Place2Be work with 3,222 schools and we were very lucky to go on the trip.

The steam train was the best part of the trip.  It was like a first class train!  When we went on the train there were activities such as colouring in a Paddington Suitcase and we wrote postcards to Aunt Lucy a character in the film Paddington 2.  We had another activity called I Spy in which you had to find 14 famous people and 12 items on the train.  The famous people were worth 20 points and the items were worth 10 points and altogether you had to get 400 points.  The driver stopped the train three times so that we could eat.  We had different sandwiches such as marmalade, Gruber’s cheese and chive and cream cheese. I loved the marmalade sandwiches the best.

It was fun meeting the Duchess of Cambridge especially when she danced with Paddington bear at Paddington Station and she talked to me on the train.  We also met David Heyman the producer of the film Paddington 2.

When we got back to Paddington Station, we were given a Paddington bag with many gifts inside it.

My trip of Paddington 2

When I went on the trip, I had so much fun and I really enjoyed it.  When I travelled there I saw Paddington 2.  We took a picture with Paddington and we had fun with him.  After that we went inside the train and it was amazing.  There was a sofa where you could sit and a table in front of you.  The sofa was really comfortable.  There were many chefs asking us what food we wanted.

After we got off the train we were given lots of presents.  What a wonderful day!

We use necessary cookies to make our site work. We'd also like to set optional analytics cookies to help us improve it. We won't set optional cookies unless you enable them. Using this tool will set a cookie on your device to remember your preferences.

Necessary cookies enable core functionality such as security, network management, and accessibility. You may disable these by changing your browser settings, but this may affect how the website functions.